The Cave FHS would like to wish all its members a very happy Christmas and good wishes for 2014. 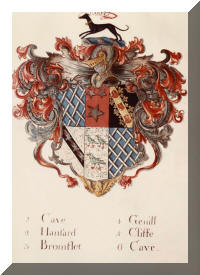 The pedigree of the CAVE family was certified by Sir William Segar, the Garter King of Arms in 1632. A great part of the pedigree was recorded at Heralds’ Visitations of Yorkshire and Leicestershire, much before 1632. It is now to be seen in Burkes’ “Peerage” as the lineage Sir Mylles Cave-Brown-Cave, Bart., but the statement given in some genealogies, that the elder brother of the founder, Wymarus de Cave, died without issue, does not seem justified by anything stated by Sir William Segar.